In Memory of
William Michael
Brodine
1929 - 2018
Click above to light a memorial candle. 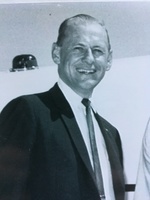 Bill was born on December 17, 1929 to Kathleen Elinor and William G. Brodine. He was the youngest of 6 children. After high school, Bill served in the U.S. Marines during the Korean War and afterwards graduated with a B.A. in History from Syracuse University. Bill loved aviation from a young age. His oldest brother Barron was a pilot and parachutist. His older brother Norm was also a pilot, and his older brother Mike was an aerial photographer during WWII. After college, Bill went into aviation sales, followed by three successful careers as a corporate pilot, a life insurance agent where he became a CLU and CFP, and as an independent tractor trailer owner/operator.

Bill enjoyed sailing his sailboat named Sloopy for many years on the Gulf of Mexico. He also enjoyed reading about history and aviation, shooting hoops and throwing the baseball.

He is predeceased by his parents, brothers Barron Brodine and Mike Brodine, sisters Virginia MacQueen and Elizabeth (Betty) Crump. Bill is survived by his brother Norman, numerous nieces, nephews and friends.

To send flowers to the family or plant a tree in memory of William Michael Brodine, please visit our Heartfelt Sympathies Store.