To share your memory on the wall of Joan Wilkinson, sign in using one of the following options:

Provide comfort for the family by sending flowers or planting a tree in memory of Joan Wilkinson.

Provide comfort for the family of Joan Wilkinson with a meaningful gesture of sympathy.

Her Joan of Arc Spirit served her well as she was Wife, Mother, Grandmother, Great- Grandmother, Sister, Aunt and Friend to all. She enjoyed being a member and teaching Sunday School for years at the Bellaire United Methodist Church. She helped with all the kid’s school projects, band, Blue Bird groups, Camp Fire groups, Cub Scouts and more. Family Camping trips and Boating outings each summer found her creatively cooking for all with a Coleman Stove and serving on a fold up aluminum table and navigating interesting horseback riding adventures. She enjoyed her travels to Hawaii’s and Mexico’s beaches…She was also fond of going to the Galveston, TX beaches to enjoy the surf. Her other interests included sewing, music, dancing, jaunting to the casinos, but she also never walked away from mowing and working in the yard. Later she worked for American General Insurance and enjoyed being in the work world again.

She lived a long life passing just 24 days shy of her 90th Birthday. We so wish her independent, tough spirit at this age had not had to encounter COVID-19, for we believe she would still be watching tv, eating Whataburgers, asking for chocolate and dancing to “This Little Light of Mine”,” Boogie Woogie Bugle Boy” or any Frank Sinatra Song.

Celebration of Life Service via Zoom will be Thursday, July 30, 2020 at 10 am. Please contact emma@fabplaygrounds.com to be included in Zoom. In lieu of flowers please consider a donation to the Alzheimer’s Association or charity close to your heart.

Receive notifications about information and event scheduling for Joan 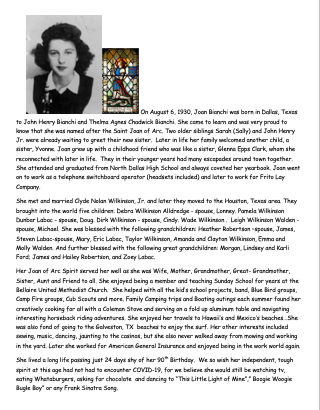 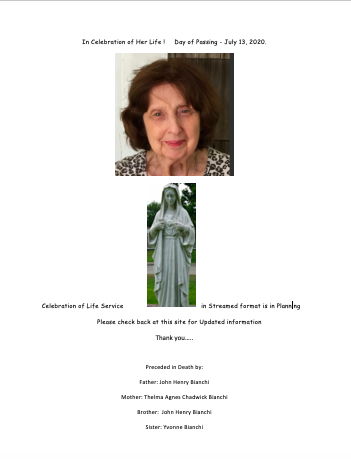 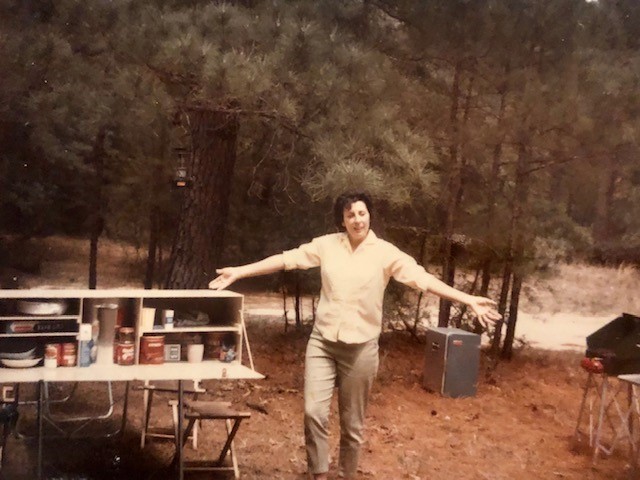 We encourage you to share any memorable photos or stories about Joan. All tributes placed on and purchased through this memorial website will remain on in perpetuity for generations.

Rebecca Clark has honored the life of Joan Wilkinson (Bianchi) by planting a memorial tree.
Plant a Tree in Memory of Joan
Planted in the area of greatest need
GT

The Bianchi family in Mississippi sends our condolences to your family for the loss of such a special lady. Great memories of her and you all. Fly high Aunt Joan ❤️.

Joan's best friend was my Mother, Glenna Clark. They shared their early teenage years which was documented well, Their love lasted a lifetime.

We are truly sorry for the loss of your Mother. Please accept our condolences and may our prayers help comfort you. Rest In Peace Aunt Joan.
Love,
Dave & Sharon Beebe
Comment | Share Posted Jul 28, 2020 at 09:52pm via Condolence